My sister's written about her work as a radio show DJ.
Yeah, my sister writes scripts for a radio show now.  I think she's good at it.  She's been doing this for quite a few months now, and she's been enjoying herself, so that's good.

My sister had an interesting talk tonight with a friend, which led to a post about her thoughts and fears about the afterlife.  As usual, she welcomes comments.

Had a really detailed series of dreams last night.  Some of them were weirder than others, but overall the tapestry of them... well, I woke up upset.  One of my dreams had Bradley​ wanting to hook up and hang out for a while, but we needed an excuse for him to come over.  So the idea was for him to send someone to get some Christmas lights I had.  I called him and told him he could come over to get them as well, since I didn't drive.  Well, he showed up - but it was 3 am when he did, and dad was trying to sleep.  We made too much noise, and dad woke up all grumpy, so I had to convince him everyone was just leaving - even though two of my friends (one being Fox) were actually coming in to keep me company.
The second dream involved Charles Xavier and the X-Men, and this is where it turned dark.  He was running his School for Gifted Students, but it was all a lie.  See, the X-Mansion was destroyed, and the students were instead living in a telepathic fantasy he constructed, where they could train and be friends and go on adventures.  The truth was, they were huddled in this ruin of a building, trapped in this construct Charles Xavier had made, eating scraps of food and huddled around a campfire within the ruins.  The only person who didn't fall for it was Wolverine - because he was actually an actor, Hugh Jackman.
Xavier was actually a little gnome-like man, and he was angry that Hugh and I were trying to help these people trapped in this telepathic construct, so he switched everything around.  To of the people - I think Colossus and ShadowCat, were 'cursed', so that they couldn't be together, instead just missing one another, brushing by each other in contact only fleetingly.  I had to fix this, so through the dream I struggled to help Kitty focus, so that she wouldn't be constantly upset, and would be able to get through her day and enjoy what time she could get with Peotr.
Of course, Xavier got angry at me over that, and said 'fine, they can be together, but there's a price.  Hugh tried to grab him, but Xavier fell apart like a pile of puzzle pieces.
And this is where my dream went dark.
The price was my father-in-law, Mr. Prickett.  He had been sitting on a chair nearby - and I realized I was in something akin to the airport.  He died.  But it was ... different.  What happened was he picked up the magazine he had been reading, and started walking down the airport hall... and he looked almost like a bundle of small jigsaw puzzle pieces, which were falling out of him, a little at a time.  And everyone around him would say, 'Goodbye, Mr. Prickett' as he went, paying respect to him.  He didn't seem to hear or see them, he was focussed on something ahead of him.  I tried to run after him, to get his attention, to tell him he didn't have to go, but I couldn't get to him fast enough.
And all the while I heard 'Goodbye, Mr. Prickett' from everyone he passed.  He'd sometimes give a little nod, acknowledging them, but kept moving ahead, his magazine tucked under his arm, his winter cap on his head.  And as he went, less and less puzzle pieces would fall away, and he started to become less and less distinct, blending more and more into the background, as his place in the world faded away... until all that was left was the jigsaw puzzle of the world, and he'd finally faded into the background.  a kind older man from the south being the last memory of who he was.
And I woke up very, very upset.

My sister and brother decided to make a new post.

Got about a week to get most of my packing done and sent to the new location.

Can you guess I'm hectic?

So, I finally told Cat what's bothering me. She's been very upset about Neko peeing on the floor in front of the door. I knew why she was doing it, but I tried to see if I could get her to stop. Cat's brought it up a lot lately - it's a stresser, but I'd been asking her to let the matter drop. Tonight, I finally told her why I didn't want this talked about for a little while.

See, Neko's diabetic. And her blood sugar's too high, so she's pissing a lot more than any cat has a right to. She's not on medication, but we've had her on a high protein diet to help try to lower her blood sugar.

This is a recent thing - and I've a feeling she's just been getting worse. She could have liver damage now - something that you have a risk for if you're diabetic - which would also explain why she's going to the bathroom so often.

I've set an appointment next Thursday with the vet. We're going to sit down and have a long, hard talk. Is Neko hurting? Is she going to get worse? Is there anything that can really be done for her? I've a feeling the answer isn't going to be pleasant - and this means I'm going to have to make that hard call again.

The thing is, Neko's fine other than this. She walks around the house, she comes and keeps me company, she begs for food - all the normal things a cat does. The thing is, Minou did this too, even while she was wasting away to nothing. Cats try to hide the fact they're in pain, they try to act normal for us - so you have to pay close attention to see when they're sick. And Neko's very, very sick. I've tried to make her life as comfortable as I can, but I've known - for a week or more - that this was going to be happening sooner rather than later.

And it's been quietly killing me. I've tried to ignore it - because she looks lively, she looks fine, she's acting like a cat should. But I know she's unwell, and I know the signs - I lived through having a too-high blood sugar, and I know what it's like. So I know Neko's blood has spiked, and I know what damage it's doing to her. And I know that, while she could live for months, she'd be in pain for that entire time, and it'd just be worse.

It's horribly selfish of me - I want to keep her by my side as long as I can, but that isn't fair to her. And it's tearing me apart. I've known this is coming - I knew she'd probably not be with me in the next few months, but I was trying to avoid thinking about it as long as possible.

15 years. I've tried to give her the best 15 years of my life as I could. It doesn't feel like 15 years - it feels like so much shorter, it's hard to believe I've had her for so long. (Neko's the brown kitty. The orange one is Malkin). 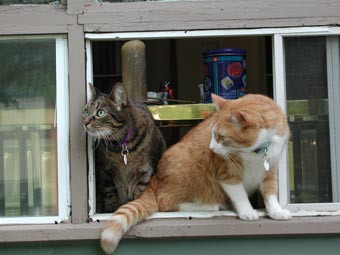 So, our roomie's moving out in September.  This was dropped on us rather suddenly, and we're trying drastically to scramble and salvage what we can.  What this means is Cat needs to pack up the spare bedroom so we can have the person move in upstairs instead of the basement, we're going to need to have our roomie empty the basement area so we can clean it, and then we need to move all of Cat's stuff into the basement from the spare bedroom.  And we need it done before September.

On top of that, one of our cats is sick.  We're taking it to the vet, to see what we can do.  She's stopped using the litterbox completely, and now she's pissing and pooping by the front door.  Not something you want when you're trying to get a roomie.  We're hoping there's something we can do about this - the alternate is... depressing.  :(

Over on IndieGoGo, my company's started the crowdfunding for Cloak and Dagger.  This is going to be a spy-genre roleplaying game, which will run on the Advanced Story Point System, which means it will function with Fox Magic, and any other SPS games we make.  :)
Collapse